The History of Joliet – Chapter 22

William Cornelius VAN HORNE once told a friend that the only religion he practiced was the golden rule. He said he was about the only man in business who did practice it.

By John WHITESIDE of The Herald News

One night in 1864, William Cornelius VAN HORNE was working the telegraph station at the railroad station in Joliet when a young woman stepped off the late train from Chicago.

She was a beauty, and there was no one there to meet her.

Carl SANDBURG, the author and poet, described that young beauty, Lucy Adaline HURD, as slender and dignified with soft, waving, black hair and hazel eyes. The 21-year-old VAN HORNE fell in love as soon as he saw her.

He crammed his corncob pipe in his pocket and offered to walk her home, SANDBURG wrote. They hadn’t walked far when they smelled something burning. VAN HORNE‘s coat was on fire from the pipe, which he had failed to put out.

Adaline laughed, but she didn’t know the man walking her home would one day become the railroad king of Canada.

Of all the railroad kings who walked the streets of Joliet, there was only one knight. And that was Sir William Cornelius VAN HORNE.

VAN HORNE, son of Joliet’s first mayor, had to quit school at age 12 and help support his mother and four brothers and sisters. His father died in 1854 from cholera. The youth first worked as a messenger boy at the railroad station, later working his way up to telegraph operator.

VAN HORNE was just 15 when he took down one of the Lincoln-Douglas debates over the telegraph wire. He started moving up in the railroad business. He was a dispatcher in Bloomington and then superintendent.

Eventually, he became president of the Northern Missouri and Southern Minnesota line with headquarters in St. Louis. While living there, Adaline caught smallpox, which was then a deadly disease. She was supposed to be quarantined in the city pesthouse.

But VAN HORNE swore the doctor to secrecy and isolated his wife in their attic. He nursed her through the disease, while working at the railroad office at night when the other staff wasn’t present. Adaline recovered without scars.

In 1882, VAN HORNE accepted a job as head of a new railroad syndicate with big plans. The investors were looking for a man to build a railroad that would link eastern and western Canada.

Described by SANDBURG as “a human dynamo” with great energy and imagination, VAN HORNE became one of the mightiest railroad builders. He brought the rail line in way ahead of schedule. The Canadian Pacific Railroad, which went through the Rocky Mountains, opened up western Canada for settlement.

For this feat, Queen Victoria knighted the cigar-smoking railroad tycoon in 1895. With his wealth, VAN HORNE branched into steamships, steel manufacture, coal mining, sugar cain production in Cuba and a chain of hotel resorts in the Rocky Mountains.

He once told a friend that the only religion he practiced was the golden rule. He said he was about the only man in business who did practice it.

SANDBURG, who much admired VAN HORNE, wrote that a doctor once told the railroad baron that he smoked too many cigars each day. The doctor limited him to just three cigars a day. So VAN HORNE had some special cigars made that were a foot long and 1 1/2 inches thick.

“I will only smoke three of them a day,” he laughed and told his wife.

In 1912, he came home to Joliet for a visit. He was known and respected all over the world, and the city received him like a visiting royal figure.

When he died three years later, a special three-car train brought him home for burial in the family plot of Oakwood Cemetery in Joliet. His father was buried there.

Every flag in the city was lowered that day. Thousands of local residents lined Cass Street as the coffin was escorted to Oakwood.

“From a humble beginning, he rose by his energy and prophetic foresight to a high place in the esteem of his fellow men,” a minister said, as the coffin was lowered into the ground of Joliet.

The Canadian government shipped a large rock here to place upon his grave. The huge stone, which still rests on top of the grave, was a piece of the Rocky Mountains that VAN HORNE had carved a railroad through to open up Canada for expansion.

In the year 2000, 85 years after VAN HORNE died, a blue-ribbon panel of judges in Canada named the old railroad man as the most outstanding business leader of the past 100 years there. VAN HORNE was picked from 118 individuals in Canada’s Business Hall of Fame. 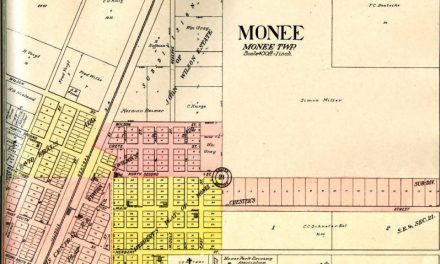 Newspaper Editor Spoke Out On Slavery