New Lenox is what was formerly known as the Hickory Creek Settlement, although the settlement extended into and at first included that in Frankfort. But the settlers there not long after gave their settlement the name of Chelsea and by that name it was known until the Rock Island road went through the township, and then Chelsea ceased to exist and it was thereafter Mokena. New Lenox was one of the first settled townships in the county and no township had more substantial or a better class of inhabitants. The township was originally heavily timbered along Hickory creek, in fact, no part of the county had a better growth of fine timber than did Hickory creek. Its black walnuts, oaks and hickories were the wonder and astonishment of the pioneers and furnished immense quantities of a fine quality of lumber for the cabins and fences. It was from the Hickory creek timber that the large quantities of oak plank came for the plank roads and that waste of material denuded many an acre of the groves of its fine trees.

The first white men to come within the borders of the township were Joseph Brown and Aaron Friend, who settled in the timber a little east of what is now known as Gougars crossing, in 1829. They could not be called permanent settlers, although both entered claims to land there. Friend was an Indian trader and when the natives were removed to the west he followed them. Brown died there the year following.

In 1830 several newcomers put in an appearance at the Grove, among them being William Rice, Sr., and his son, William, Jr., and their families. They entered a claim adjoining on the west to that of Brown and Friend, and which they afterwards sold to John Gougar when he came in the fall of that year. They were from Indiana and were very quiet, respectable citizens. After selling out to Gougar they made a claim on the site of the present village of New Lenox, but after a year sold out and removed to the eastern part of the county.

William Gougar, Sr., was a native of Pennsylvania, but had lived for a while in Ohio and also in Indiana previous to coming to Illinois. As stated above, John Gougar came to the Grove in the fall of 1830 and his father came the following summer. John Grover had been hired by Mr. Gougar to come to the Grove with his son and he came and had brought his family. He remained with the Gougars some two years and then entered a claim to the east of the present village site. There he lived for several years, but finally sold out and removed to Iowa, where he died many years ago.

Lewis Kerchival came from Ohio to the township reaching the Grove October 19, 1830. Upon his arrival there he erected a tent to shelter his family until he could build a cabin for them. The tent was but a rude affair, a sort of wigwam or tepee made of sticks driven into the ground and then quilts and blankets hung up on the sides to protect them from the wind and rain. He then went to work on his cabin and with the help of his wife and daughters in two weeks’ time he had a very comfortable cabin of two rooms, all ready to move into. Their first winter in the township was that of the deep snow and they suffered many privations and hardships. They were often reduced to almost the last biscuit for food, but the timely arrival of supplies saved them from starvation. Mr. Kerchival died at his home in New Lenox September 14, 1846. His son, James C. Kerchival, died February 7, 1873.

Judge John J. Davidson came there in 1830 and bought the Friend claim, adjoining on the east that of the Gougars. He was a native of New Jersey, but had lived for some time in Indiana before removing to the settlement.

Cornelius C. Van Horne was one of the most prominent men not only of New Lenox, but of the county at that time. He was from New York and was a man of well known prominence and intelligence who expressed his opinions of matters and things without fear or favor. He was a justice of the peace of his township for many years and in 1850 removed to Joliet, where, in 1852, when the city was chartered, he was elected its first mayor. He died in Joliet July 7, 1854.

Samuel Haven, another of the prominent men of the township, settled there in 1835. He was from New York and when he came there brought with him his four sons—Dwight, Charles, Rush and Alvin. Dwight, the eldest, is still a well known resident of the township, having lived there continuously since their first arrival, seventy-two years ago.

Joseph S. Reynolds, another of the early pioneers, came to this township in 1833. He was from Ohio, but had lived for some time in Ottawa, before removing to New Lenox. He died in 1853.

Abraham Francis was a native of Ohio. He came to the township in 1831 and settled in the Grove north of the creek. Henry Watkins, another pioneer of 1831, was the father of John Watkins, the pioneer school teacher. Others who settled in the township at a very early period were Michael and Jared Runyan, Isaac and Samuel Pence, Joseph, Alfred and James Johnson.

The first death in the township was that of Joseph Brown, in 1830, above mentioned, and it was thought that his was the first death of any white person in the county. The first marriage was that of Thomas Ellis and Miss Anne Pence, July 4, 1834. The first white child born in the township was Elizabeth Norman, born in January, 1832. The first physician to practice in the Hickory Creek settlement was a Dr. A. W. Bowan, then of Joliet, and the first preachers there were Father Beggs and Rev. Mr. Prentiss, who located in Joliet at an early day. The first postoffice was kept at William Gougars, although C. C. Van Horne was the first postmaster. It was established in 1832, but some two or three years later it was removed to Joliet and Dr. Bowan was appointed postmaster. Mr. Van Horne was also the first justice of the peace and also the first school master. A small log school house had been built in the edge of the timber on Hickory creek, in the summer of 1832 and the following winter Mr. Van Horne taught school there. He had twelve scholars of all sizes from the little tot just able to walk up to young men and women. The only books used in the school were the elementary spelling book and the old English Reader.

The Mormons held meetings in the township at an early day and gained some converts.

The name New Lenox was taken from Lenox, New York, some of the early settlers being from that town, and thus introduced the name to the Illinois township. Previous to 1850, when the township was organized and named, the settlement was known only as Hickory Creek and the site where the village is was known as Van Horne’s Point. On the north side of the township is a road extending across the same from east to west, which has been called Maple street, from a very early day, because of the beautiful maple trees that the early settlers of the street transplanted beside the roadway. These trees have now attained a good size and are the pride and beauty of the township.

There was the same excitement in Hickory Creek settlement that there was in the other settlements in the county in 1832 when the Sac war was begun. Some of the settlers went to the Wabash, settlements and others to Fort Dearborn, in Chicago, but the war was soon over and all returned to their cabins and resumed their daily life as though nothing had happened. In most instances they found on their return everything pretty much as they had left it. The fowls, sheep and cattle had taken good care of themselves, had increased some in numbers, and, although a little wild at first, yet they soon became accustomed to the sight of their masters and ere long became domesticated again.

The township is well supplied with railroads, having four that pass through the length and breadth of the township—the Rock Island, the Michigan Central, or “cut-off” the Elgin, Joliet & Eastern, and the Wabash. There is a large business done on all of these roads and the running of the trains and whistles of the engines are heard there almost constantly.

The schools of the township are well kept up, each school district having very good school buildings.

The Village of New Lenox, Illinois

When the Rock Island road was completed through the township a station was located at Van Horne’s Point and named Tracy, in honor of the general superintendent of the road, General J. B. Tracy, but Mr. Tracy, with becoming modesty, declined the honor and it was then named New Lenox station, after the township. In 1858 George Gaylord of Lockport laid out the village and A. J. Mathewson, then the county surveyor, surveyed and platted it. Soon after several dwellings were erected there, a post-office established, some two or three stores built, and soon it became quite a village. About that time the Rock River conference of the Methodist Episcopal church purchased the Grove adjoining the village on the west for camp grounds in which to hold the annual camp meetings of the church and they have since been used solely for that purpose. The grounds are fenced and very neatly and tastefully fitted up with cottages and suitably built buildings and are now the pride of the community.

There are two churches in the village, the Methodist before alluded to and the Grace Episcopal church. Both churches are well sustained.

Spencer was a small village in the cut of the road, but there is but little left of it now but a few dwellings, a store and warehouse or two for storing grain.

The Schools of New Lenox, Illinois

Source: Past and Present of Will County, Illinois, by W. W. Stevens President of the Will County Pioneers Association Assisted by an Advisory Board, consisting of Hon. James G. Elwood, James H. Ferriss, William Grinton, Mrs. Kate Henderson and A. C. Clement ILLUSTRATED Chicago: The S. J. Clarke Publishing Company 1907. 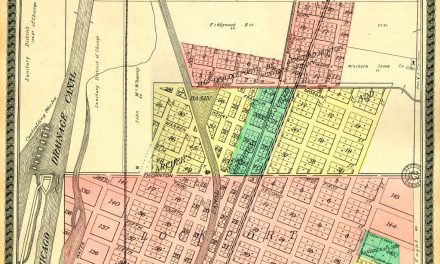 Joliet: Our Town, Our History