The History of Joliet

ABOUT THE SERIES: (April 1, 2001)
Joliet: Our town, our history
Did you know? City’s vibrant story leaps off page

CHAPTER 3: (April 14, 2001)
Establishing a city
Joliet’s first taste of politics turns out to be a circus

CHAPTER 5: (April 28, 2001)
Joliet businessman’s life ends in disgrace
Matteson once was the most influential man in town

CHAPTER 6: (May 5, 2001)
Joliet’s first railroads quick but deadly
Despite the risks, residents clamored for fast transportation

CHAPTER 8: (May 19, 2001)
The Hickory Creek mystery
City ready to jump to conclusions over mysterious death

CHAPTER 12: (June 16, 2001)
Joliet patriots hear call of Civil War
Many ready to fight and save the Union

CHAPTER 14: (June 30, 2001)
Bartleson lost arm, then his life, for nation
The best remembered and most noble was Bartleson

CHAPTER 15: (July 7, 2001)
Thinned ranks return to Joliet from Civil War
Residents believed the backbone of the rebellion had been broken

CHAPTER 16: (July 14, 2001)
Newspaper editor spoke out on slavery
Calneh Zarley was considered the most outspoken voice in the city

CHAPTER 21: (August 18, 2001)
Fire protection became priority
New homes and businesses were being constructed all over the city

CHAPTER 24: (September 8, 2001)
Joliet chief pegged it: inside job
From the very beginning, Joliet Police Chief Frank Murray told the Pinkerton detectives that the train robbery was an inside job.

CHAPTER 25: (September 15, 2001)
Joliet boasted in 1887
In the summer of 1887, 35 years after the city was incorporated, The Joliet News bragged about the city in a special Business Men’s Edition of the newspaper.

CHAPTER 26: (September 22, 2001)
‘Bennitt’s Boys’ helped carve a piece of history
Like others who came to Joliet as young men, Fred Bennitt arrived in Joliet as a young man full of dreams for the future.

CHAPTER 27: (September 29, 2001)
Temperance vs. Whiskey Row in Joliet
In the final months of the 19th century, the residents of Joliet were screaming that they were angry. Their anger centered around the saloons along Whiskey Row.

CHAPTER 28: (October 6, 2001)
Steel baron welcomed Roosevelt, but W.J.Bryan was another story
They all knew the famous face of Theodore Roosevelt, better known as just Teddy

CHAPTER 29: (October 13, 2001)
Horseless carriages come and go, with Model T just down the road
In 1900, business was booming for the Phoenix Horse Shoe Company in Joliet. But the beginning of the end was already in sight for horses.

CHAPTER 30: (October 20, 2001)
Warden’s wife killed in 1915 local mystery
They called her “the little mother at the big stir.” Odette Maizee Bordeaux Allen was also known as the angel of Joliet because of her beautiful singing voice.

CHAPTER 31: (October 27, 2001)
Buffalo Bill not tall in the saddle
William Frederick Cody, the famed scout, hunter and showman, was described as “aging, feeble and hardly able to climb into the saddle.” He was 75 years old then and this was one of his last shows.

CHAPTER 32: (November 03, 2001)
World War I regiment earns praise
A patriotic fever swept across Joliet on April 6, 1917, when the United States declared war on Germany and joined World War I.

CHAPTER 33: (November 10, 2001)
Dangerous celebration at war’s end
When the guns started going off at 3 a.m., one man rushed outside because he thought a neighbor had finally caught that chicken thief. “The chicken thief turned out to be the Kaiser,” the man told the Joliet Evening Herald-News

CHAPTER 34: (November 17, 2001)
Maximum security is no match
In the summer of 1919, the toughest inmates in the old Joliet prison were moved to the big circular cellhouse at Stateville. The new prison was still under construction. But its builders said that round cellhouse was absolutely escape proof.

CHAPTER 36: (December 01, 2001)
Grand Army upheld ideals after Civil War
In the fall of 1923, a group of old soldiers gathered here in Joliet to remember those days that forever had bound them together.

CHAPTER 37: (December 08, 2001)
Hit-and-run marked city’s first auto death
“It may seem unfortunate to this man that he is the first to be convicted of such a crime in Will County. … Automobile drivers must realize they do not have exclusive right or control over the highway …” 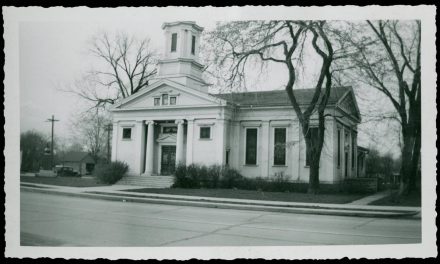